New elements in the Representative list of the Intangible Cultural Heritage

New documents relating to the protection of intangible cultural heritage

New elements in the Representative list of the Intangible Cultural Heritage

CROATIA – Bećarac singing and playing from Eastern CroatiaBećarac music is popular throughout eastern Croatia and is deeply rooted in the cultures of Slavonia, Baranja and Srijem. Lead singers interchange vocal lines while creating, emulating and combining decasyllabic verses and shaping the melody, all the while accompanied by a group of singers and tamboura bands. Lead singers shape performances according to the context, often expressing thoughts and feelings that would otherwise be inappropriate. Performances in informal situations or in contemporary festive events and celebrations last as long as the singers’ creativity and energy permits. 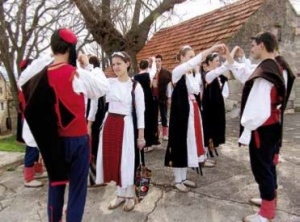 CROATIAN – Nijemo Kolo, silent circle dance of the Dalmatian hinterlandThe Nijemo Kolo is a Dalmatian closed-circle dance performed by communities in southern Croatia exclusively without music, although vocal or instrumental performances may precede or follow it. Male dancers lead their female partners in energetic, spontaneous steps, seemingly without defined rules, that publicly test the female’s skills.Today, the Nijemo Kolo is mostly performed by village troupes at local shows and carnivals, on saint’s days at parish churches or at regional and international festivals. It is transmitted from generation to generation, although increasingly this occurs through cultural clubs.

CYPRUS – Tsiattista poetic duelling Tsiattista is lively, impromptu oral poetry performed in Greek Cypriot dialect whereby one poet–singer attempts to outdo another with clever verses of rhyming couplets, often performed to the accompaniment of the violin or lute. The poets have a ready wit, rich vocabulary and an active imagination and are able to respond to an opponent by improvising new couplets on specific themes within very strict time constraints. It has traditionally been performed by men at weddings, fairs and other public celebrations but recently women have begun performing also.