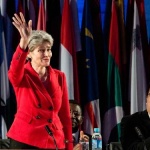 UNESCO’s General Conference today elected Irina Bokova for a second four-year term as Director-General of the Organization. She was nominated for the position by UNESCO’s Executive Board on 4 October.

Born on 12 July 1952 in Sofia (Bulgaria), Irina Bokova was first elected Director-General of UNESCO on 15 November 2009. Her first term has been marked by a major reform of UNESCO, to make the Organization more efficient and relevant to challenges facing peace and development today, in a world of diversity that is increasingly interdependent.

Over the past four years, Irina Bokova has focused UNESCO’s programme on two overarching objectives – forging a culture of peace and promoting sustainable development – along with two global priorities – Africa and gender equality. She spearheaded UNESCO’s contribution to shaping the new post-2015 sustainable development agenda, highlighting the essential contribution of education, culture, the sciences, communication and information. The new agenda is currently being decided by the United Nations and the whole of the international community.

“Human rights and dignity are the compass directions for all UNESCO’s action, and must remain the foundations for the lasting peace and sustainable development that we are seeking to build – more than ever, unity must guide us, to build the future we want for all, a more equitable, just and peaceful future.”

Irina Bokova has received doctor honoris causa from many prestigious universities across the world. In addition to her mother tongue, she speaks English, French, Spanish and Russian.