”Surova” inscribed on the Representative List of the ICH of UNESCO

International forum оn the occasion of the 70th anniversary of UNESCO 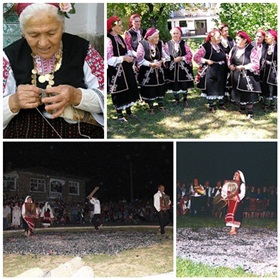 Youth competition
“Meet and share the living heritage of Bulgaria”

General conditions of the competition
On the occasion of the celebrations dedicated to the 70th anniversary of the United Nations Educational, Scientific and Cultural Organization – UNESCO (16 November 1945), the Regional Centre for the Safeguarding of Intangible Cultural Heritage in South-Eastern Europe announces Youth competition titled “Meet and share the living heritage of Bulgaria” for students over the age of 15 in the secondary Bulgarian schools and Bulgarian universities.
The objectives of the competition are as follows:

General terms:
Developing a poster, card, video or multimedia presentation for one of the elements of Bulgaria included in the UNESCO Representative List of Intangible Cultural Heritage (3 elements inscribed by Bulgaria). The proposal should present the element in view to ensure its recognition, respect and popularization.

Furthermore the proposal should include a written part with the vision of the author for its safeguarding and transmission and how he/she sees the participation of the youth from the region of Southeast Europe in the process. Proposals can be submitted in electronic format in Word up to page (Cambria 12).

Deadline for submission of competition works – November 13, 2015 (Friday) to the e-mail address of the ICH Centre Sofia: office@unesco-centerbg.org.
Rewards:
All competition works received by November 13, 2015 (Friday), which correspond to the conditions of the competition, will be judged by an expert jury.
For more information, visit the official website of the Regional Centre: www.unesco-centerbg.org and its Facebook page Unesco Centre Sofia.

Statute of the Competition
Application form