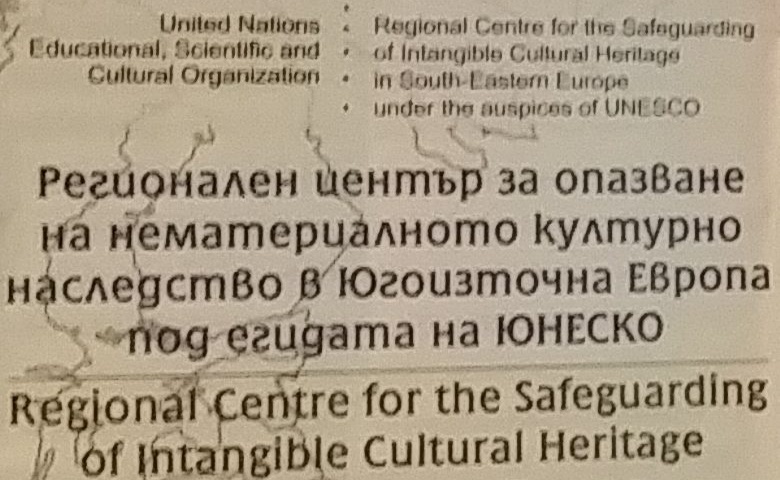 The Conference is organized by Club UNESCO Leonardo Da Vinci-Sofia in cooperation with the Regional Center for the Safeguarding of Intangible Cultural Heritage in South-Eastern Europe under the auspices of UNESCO and the Diplomatic Institute to the Minister of Foreign Affairs of the Republic of Bulgaria.

It is held under the auspices of the National Commission for UNESCO – Bulgaria and the European Federation of UNESCO Clubs, Centers and Associations.

With the Conference we would like to commemorate also the 70th anniversary of UNESCO’s foundation and the 60th anniversary of Bulgaria’s accession to UNESCO. The event is included in the action plan of the Regional Centre for the Safeguarding of the Intangible Cultural Heritage in Southeastern Europe under the auspices of UNESCO.

The Conference will take place on 24th and 25th November 2016 at the Ministry of Foreign Affairs of Bulgaria (2, Alexandar Zhendov Str.), Sofia, Bulgaria.

In 2003 the General Conference of UNESCO admitted a Convention for safeguarding of intangible cultural heritage (ICH) focused on collecting and safeguarding the unique “vital roots” of mankind in the area of oral traditions and expressions (including language as a vehicle of the intangible cultural heritage); artistic and performing arts; social practices, rituals and festive events; knowledge and practices concerning nature and the universe, traditional craftsmanship.

Bulgaria always dedicates a first grade importance to preserve the abundance and variety of these “vital roots”, and is dedicating efforts to accommodate this agreement and the long list of international approaches for collecting, preserving and deploying of World Cultural Heritage.

As a consequence, in 2008 it was exactly in Bulgaria that the First Regional Center for Safeguarding of the Intangible Cultural Heritage in South-Eastern Europe under the auspices of UNESCO was founded.

All activities in this respect show the position of Bulgaria as a pillar in preserving centuries-old cultural values. The success of this with requires all efforts and positive energy of each NGO and Government structure to be integrated with UNESCO designations and objectives.

Good examples of such synergy are France, Italy, Romania, Greece and other countries where NGOs working under the aegis of UNESCO, are united in national federations and actively participate in structuring and development of governmental, regional and local policies in the areas of culture, science and education.

Objectives of the International Conference: