A workshop on “Implementing the UNESCO Convention for the Safeguarding of the Intangible Cultural Heritage at National Level”, 5-9 February in Dnipro, Ukraine 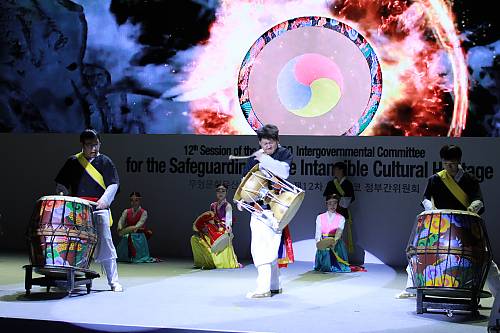 The twelfth session of the Intergovernmental Committee for the Safeguarding of the Intangible Cultural Heritage took place in Jeju Island, Republic of Korea, from Monday 4 to Saturday 9 December 2017.

9 intangible cultural heritage elements have been inscribed on the UNESCO’s Lists by the Member States of ICH Centre Sofia.

List of Intangible Cultural Heritage in Need of Urgent Safeguarding:

Whistled language is a method of communication that uses whistling to simulate and articulate words.  The practice developed as a result of the steep mountains and rugged topography of the region, which required the local population to find an alternative way to communicate across long distances. Although the community is aware of the importance of this practice, technological developments and socioeconomic changes have led to a decline in the number of practitioners and areas where it is spoken. One of the key threats to the practice is the use of mobile phones.

Representative List of the Intangible Cultural Heritage of Humanity:

The main practice consists of making, offering and wearing a red and white thread, which is then untied when the first blossom tree, swallow or stork is seen. The artefact is considered to provide symbolic protection against perils such as capricious weather, with the practice ensuring a safe passage from winter to spring for individuals, groups and communities. All members of the communities concerned participate, irrespective of their age

According to their beliefs, the noisy bell-ringing and brandishing of the wooden stick chase everything evil away and bring happiness to those they visit. Men, women and children are actively involved in all activities associated with the custom. Kurenti normally form groups, and some establish associations.

Kochari is a traditional dance that is widely performed throughout Armenia during holidays, festive celebrations, family ceremonies and other social events and is one of the rare traditional dances whose chain of transmission has never been interrupted.

Kolo is a traditional, collective folk dance performed by dancers who are interlinked to form a chain, usually moving in a circular line holding hands with their arms down.

The woodcarving is a constitutive part of the local community’s culture, a measure of the beauty and amenity of home interiors, and a tradition that forges a sense of community and belonging.

Rebetiko songs contain invaluable references to the customs and traditions of a particular way of life, but above all the practice is a living musical tradition with a strong symbolic, ideological and artistic character.

To mark this occasion, various ceremonies and rituals connected with nature are performed, guaranteeing the wellbeing, fertility and prosperity of the family and community and protecting livestock and crops for the upcoming year.

They perform cultural and educational activities aimed at safeguarding the customs and traditions of Bulgarian people. They are established by communities themselves and are open to everyone irrespective of age, gender, political and religious views.