Living heritage experiences in the context of the COVID-19 pandemic 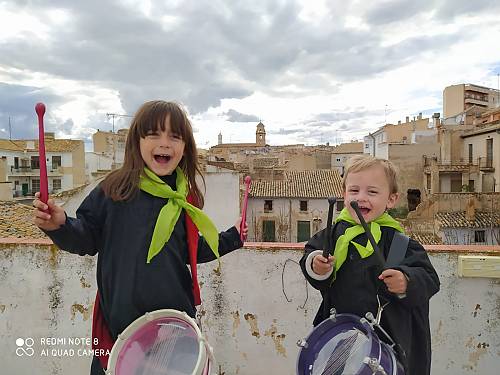 Children beat drums from rooftops as part of tamboradas celebrations in Hellin, Spain, April 2020, which took place from homes this year rather than on the streets.
© Redmi Note 8 – Aid Quai Camera

While physical distancing and confinement are affecting the way we live, some communities are finding creative ways to adapt to the circumstances and continue practicing their living heritage.

If you have a story to share, we encourage you to get in touch through our online survey and send with us videos or pictures you may have. We will be featuring different stories on the UNESCO website and communication platforms in the coming weeks. For more information, contact ich-com@unesco.org.

In line with UNESCO’s response to the coronavirus (COVID-19) pandemic and its impact on culture, the Secretariat launched a survey to exchange and document experiences of living heritage during the COVID-19 pandemic. A dedicated webpage will soon be published to share this information and to promote further learning on the topic.

In Croatia, the procession of Za Krizen (‘following the cross’), inscribed on the Representative List of the Intangible Cultural Heritage of Humanity, was held this year in changed circumstances, ensuring continuity of its 500-year history. Normally attracting thousands, the procession this year was restricted to only 15 participants from each of the six towns around the World Heritage site Stari Grad Plain (Jelsa, Pitve, Vrisnik, Svirče, Vrbanj and Vrboska).

Marija Plenković, Director of the Jesla Municipal Museum, said that news that the procession would be going ahead, even with the drastically reduced number of participants, was met with relief by the community who recognised the historic importance of this year’s event.

“The continuity of this tradition gives people a sense of persistence. The procession is deeply rooted in the identity of the local community”, she said by email. The circumstances of this year’s event, she added, recalled the partial interruption of the procession during the Second World War in 1943 when the island was under Italian occupation and only 12 people from each town were allowed to participate.

The Holy Week processions in Popayán, Colombia, also inscribed on the Representative List, were similarly affected by the ongoing crisis. One of the oldest traditions in Colombia practised since the colonial period, the processions attract a great many people to the region every year. While the event could not take place at the same scale due to the crisis, its transmission was ensured through digital media, including a series of conferences, talks, announcements and videos organized by the Fundación Junta Permanente Pro Semana Santa.

In Spain, the tamboradas drum-playing rituals, which form an integral part of Catholic Holy Week celebrations, were not performed in the streets this year. Instead, the Peñas de Tamborileros de la Semana Santa de Hellín (Association of Drummers’ Clubs of the Holy Week of Hellín) in Castile-La Mancha, launched the slogan ‘Stay at home’ and invited the drummers to play more than ever from windows, balconies and terraces of the city.

At 5pm on the Friday of Sorrows, the sound of simultaneous, intense beating filled the city as parents and children took their balconies, creating an atmosphere charged with emotion and feeling of collective communion.

These examples remind us of the continued importance of intangible cultural heritage in the lives of many during times of crisis in providing a sense of belonging and solace from the difficult circumstances we face.