”Xhubleta – as a unique traditional craftsmanship and forms of its use” 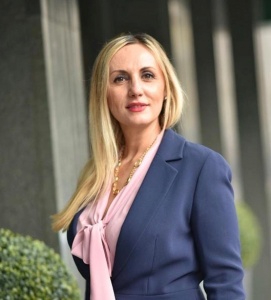 Albania and Bulgaria have more features that unite them than I expected. As I have been here for a little more than 2 years, I have realized that we have a lot to explore about one other, especially in terms of culture and history.

Mandritsa, the only Albanian-origin village in Bulgaria, was founded in 1636 by Albanian Orthodox dairies who had served in the Ottoman army. At the beginning of the 20th century, the village reached about 3500 inhabitants, while today Mandritsa is a small village with about 70 inhabitants, some of whom still speak a pronounced Albanian dialect, Tosk Albanian. In the meantime, there is a recognized Bulgarian minority in Albania, who speak an old Bulgarian language. Both these two communities serve as a bridge to bring closer the two countries and two peoples.

In terms of art, I would single out iconography, very similarly cultivated in both countries. In Albania, it is well known especially in Berat and Korҫa, where are located the National Iconographic Museum “Onufri” and the National Museum of Medieval Art. Many of Onufri’s icons, dating back to the end of the European Renaissance, have managed to survive. You can also find Onufri’s works in the National Historical Museum of Tirana, specifically in the pavilion dedicated to post-Byzantine iconography.

The Albanian wealth of traditions is the principal motivation for travel, with more and more tourists seeking to find out about this hidden gem in the Mediterranean, its culture and to experience its peculiarity of performing arts, handcrafts, rituals and cuisines. In the basket of Albanian intangible heritage stands proud Albanian folk iso-polyphony. Otherworldly, complex and trance-inducing sounds manifested by the power of the human voice, carrying the emotional weight of centuries of pride, poverty and oppression; polyphonic vocal music is a living tradition in Albania and in 2005 was proclaimed a Masterpiece of Oral and Intangible Heritage of Humanity by UNESCO. This centuries-old traditional folk performance, somewhere between singing and recitation, between lament and celebration, joins multiple voices into a unique synthesis and has spanned time and space to inspire anyone from 18th century poet Lord Byron to contemporary Albanian author Ismail Kadare, among many others.

Thus, safeguarding intangible cultural heritage, is a valuable source of the economy. The intangible elements of heritage are of greater significance in facilitating emotional and sentimental attachment to a nation. They contribute to national identity and their scientific and cultural value makes the country recognizable and improves its image.

There is a risk that certain elements of intangible cultural heritage could die out or disappear without help, but how can we safeguard and manage a heritage that is constantly changing and part of ‘living culture’ without freezing or trivialising it? Safeguarding them is about the transferring of knowledge, skills and meaning. Hence, first and foremost, a good knowledge by the young generation of the values of culture as a symbol of the identity of a country is significantly needed. Unfortunately, there is still a quite distant relationship between young generation and art history and education and one of the main challenges in safeguarding intangible heritage is the loss of interest and enthusiasm to practise by the young generation.

We need to cultivate young people’s interest and nurture their curiosity. More efforts and concrete actions are needed to integrate local knowledge in formal education curricula. However, that is not enough if the they are not encouraged to go out and experience..

When transmitted from generation to generation, intangible heritage is continuously created and recreated. It is exactly recreation that we have to encourage. A substantial engagement of young professionals in spreading the importance of active participation of local communities to protect and safeguard the cultural activities needs to be encouraged. On the other hand, governments, international organizations and NGOs have an important role in supporting projects and initiatives to this end.

While fragile, intangible cultural heritage is an important factor in maintaining cultural diversity in the face of growing globalisation. An understanding of the intangible cultural heritage of different communities helps with intercultural dialogue, and encourages mutual respect for other ways of life. We cannot gain a complete vision of the region, without a good knowledge of its intangible heritage. Yet, Bulgarians and Albanians, in this globalized world, have managed to preserve many characteristics that unite them. Both Bulgarians and Albanians have been able to maintain hospitality as a feature of intangible wealth. What we need to do is start thinking as a region more than as single countries and work more on what unites us. We must take advantage of all regional platforms to promote our culture and history. The South-East European Experts Network on Intangible Cultural Heritage, established in 2007 by UNESCO, is a good platform aiming at safeguarding of the intangible cultural heritage in the region. Both Albania and Bulgaria are part of it.

Countries in the region should raise awareness of the value and the function of intangible heritage in their territories and undertake numerous activities addressing that heritage. Engagement, sustainability, protection and innovation should be in the core of these initiatives, which should involve civil society, policy makers, heritage and cultural heritage professionals, local tourist organizations, and above all young generation. We ought to create mechanisms to better involve communities in the safeguarding process; improving and expanding upon the limited national inventory; and strengthening the transmission of living heritage-related knowledge and skills in our region.

The Albanian National Committee for Intangible Heritage decided to expand the national list of intangible cultural heritage with the following living heritage elements:
Typical mountain dance to the rhythms of the ‘tupan’ from Tropoja (“Kcimi i bjeshkës me tupan i Tropojës”). The ancient ritual of transhumance (seasonal migration of livestock);

Xhubleta, as a unique skill and know-how craft and modes of use.

All these elements of intangible cultural heritage deserve to be inscribed as World Heritage Values.