“Xhubleta – as a unique traditional craftsmanship and forms of its use”

“Xhubleta – as a unique traditional craftsmanship and forms of its use” 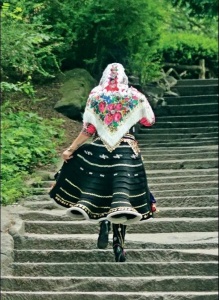 Although no longer functional in everyday life, the traditional garments remain an important part of Albania’s cultural identity. A unique phenomenon in the artisanal craftsmanship in the North of Albania, the “xhubleta” is a traditional folk costume of women, made by felt, which is characterized by a bell-shaped bottom, which has a noticeable wavy, especially on the back. Dressing with xhubleta includes all the elements that make up this intricate bell-shaped structure and various accessories, such as shirt, knee-high socks, ornate belts, etc. One of the most fascinating elements of xhubleta is the system of symbols found in the ancient embellishments and designs. Tradition required that this garment be made at home, by young women on the eve of their weddings. A perfect xhubleta must be standing up by itself, without falling. That one taken by the brides as part of their dowry was the wedding xhubleta, used for the wedding day and throughout the first year of marriage and which, afterward, was preserved for the day of death. The other xhubleta –s were for daily wear or events. In the mountain villages, women had from three to nine xhubleta-s each. Xhubleta, which in the Highlands, is also known as the “mountain dress” for women, represents one of the most ancient dresses of a Mediterranean type, which passed millennia to survive to this day. This dress represents a heritage of the material culture from the Illyrians to the Albanians. Thus xhubleta represents the earliest clothing in Albania and the Balkans. This was underlined by the Hungarian paleontologist, F. Nopsca, after many studies regarding the costumes of Northern Albania. According to him, “xhubleta appears very interesting from a costumography point of view…”. This idea has been supported by other researchers, such as by the well-known Albanian ethnologist Rrok Zojzi, who states that the origin of the xhubleta comes from the Creto-Mycenaean civilization.