Element inscribed on the National ICH Registry of Georgia 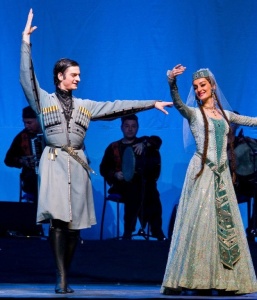 Georgian Dance “Kartuli” is an art-sample of the overall Georgian culture, which is perceived and recognized by Georgians as one of the important symbols of national identity. The historical origin of this specimen is related to the ancient period of Georgian culture. Geographic area of the dance “Kartuli” covers the whole Georgia. In addition, it is dominated by stylistic features of the ethnographic regions, located near the capital, where the dance “Kartuli” was one of the most common forms of ballroom entertainment for aristocratic society of the 19th century. Dance “Kartuli” is a duet, that express a wonderful love story between a woman and a man.

This dance consists of five parts and has a well-defined structure: 1.Exposition–the man’s performance; 2.Invitation of woman and a circle way of the pair; 3.Man’s solo; 4.Woman’s solo; 5.The culmination: “dosado” between a woman and a man and the final code.

The brilliant performer of“Kartuli”Iliko Sukhishvili considered that this dance, with its simplicity and refinement was so close to perfection that free interpretation or alteration would only harm it. The emphasized expression of chivalry towards a woman is the first thing that is most visible for the viewer. During the dance, man is not allowed to touch the woman and moreover, he should keep a certain distance from his partner. Today, the dance “Kartuli”, has retained its original authenticity and is performed on public holidays such as weddings, family parties, folk feasts. This dance has become a beauty of Georgian stage choreography. Dance “Kartuli” is included in the repertoire of all folk choreographic ensembles. Typically, it is performed by dancers with outstanding performance skills, artistry and technical ability. This unusual duet of a man and a woman, reminding us a forgotten cult ritual, was assigned to be the indisputable sign of being Georgian. 09.19.2020, initiated by the Choreology Department of Theater and Film State University of Georgia, the dance “Kartuli” was awarded the status of a monument of Intangible Cultural Heritage.

Dance “Kartuli” tradition is carried by all citizens of Georgia. This dance is included in the repertoire of all folk choreographic ensembles. Today, the dance “Kartuli”, has retained its original authenticity and is performed on public holidays such as weddings, family parties, folk feasts.