Element, inscribed on the National ICH Registry of Georgia 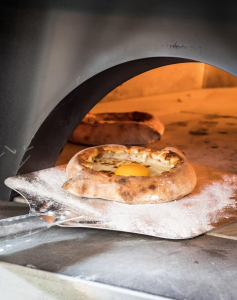 The art of Georgian cuisine has been developing for millennia, with the effort of many generations. Georgians merged and combined the abundant food supply given by the environment and created a unique model of culinary art, and with it, one of its main highlights – Khachapuri. Khachapuri – a cheese-filled bread, is the work of Georgian traditional cuisine, in which the people took a lot of pride. It is a ritual dish in the Georgian gastronomical culture, as Khachapuri an essential part of every feast.

It is considered an appetizer, a main dish, and dessert. It can be served everywhere and anytime, as it is a festive yet everyday dish. Most of the Georgian population bake it at home with their families, regardless of their ethnic minority. Classical Khachapuri – The main type of Khachapuri is considered to be “Imeretian/Imeruli khachapuri”, which is widely spread. It is baked with high-quality dough and white Imeretian salted cheese. The cheese is placed in a softly mixed, risen dough, the salt is added, and the round shape is given. It is baked in an oven or earthenware bread-baking dish. There are more than 50 types of Khachapuri from different regions of Georgia. For example Adjarian, Gurian, Megrelian, Meskhetian, Tushetian and etc. With their technology and essence, they belong to the Khachapuri group and represent the diversity of the dish. Every region has its unique ingredients and sometimes even the shape, but the dough and cheese are permanent elements of the dish. So much so that Khachapuri represents the ethnic characteristic of Georgians scattered all around the world. One can surely say that Georgians consider Khachapuri, one of their culinary masterpieces, as a part of their cultural identity.

Khachapuri tradition is not endangered in Georgia, as khachapuri is an integral part of the daily diet of the Georgian population and is also an essential component of festive events. However, it is noteworthy that some regional varieties of khachapuri, which are part of various rituals, are in danger of being forgotten.