Interview with H.E. Mrs. Brândușa Predescu, Ambassador of Romania to the Republic of Bulgaria

Element inscribed on the National ICH Registry of Slovenia 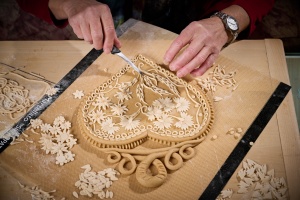 Slovenia has been named the European Region of Gastronomy 2021. In this special year, the energy of various stakeholders is directed at learning about the special local culinary features and the promotion of the national cuisine and gastronomy. So this time we present gastronomic specialty of Slovenia.

Making small breads and the wooden models for them is a traditional handicraft characteristic of the Škofja Loka area. A small bread is a honey pastry made from rye or wheat flour, honey, pepper, cinnamon, cloves, and potash or deer salt or baking soda. The honey pastries are decorated by pressing on the dough with hand-carved wooden models or are shaped and decorated by hand.

Small breads are made by women who follow traditional forms and motifs of decoration, and at the same time add their own creativity, so each maker has her own, somewhat unique way of making small bread. They most often form a small bread in the shape of a heart and a piece by hand, but there are also present different shapes such as rhombus, pipe, cigar, star, flowers, fish, vase, St. Nicholas, angel, chicken, scissors, horse, various New Year’s decorations and others. The basic shape of the bread is additionally decorated by hand with different flower motifs. The breads are baked and coated with honey water.

They also follow the traditional forms and motifs of decoration in the production of wooden models for small breads, in which they press the dough. The most common forms of models in the Škofja Loka area are heart, rhombus and circle, but some others also appear. A variety of motifs appear in the basic form: floral (different flowers, ears, vines, carnations …), church (IHS, Mary), figural (rooster, fish, baby, angels, various saints …) and other motifs.