Element inscribed on the National ICH Registry of Slovenia 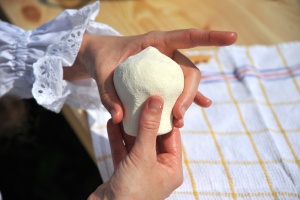 By the end of May 2021, 91 elements were inscribed in the Register of the Intangible Cultural Heritage of Slovenia, of which fifteen food-connected elements. One of them are trniči cheeses – small dried, pear-shaped cheeses which are characteristic of the mountain pastures known as Velika planina, Mala planina and Gojška planina in the Kamnik-Savinja Alps in Slovenia. They are prepared from skimmed sour milk, which is heated to the form of cottage cheese. This is drained, salted and cream is added so that the cheese mixture is adequately shaped. With their hands, bearers form loaves of pear-shaped, towards the top pointed shapes that can end in a small roundness. The cheese ball is then decorated with ornaments imprinted with wooden markers called “pisave”. These are 20 cm long and up to 2.5 cm wide markers made of linden, maple, beech, larch or hazel wood, in which various ornaments are carved. In the past, markers were carved by shepherds during grazing.

Trniči cheeses are used in the daily diet, often as a supplement to meals. As a special feature of the cultural heritage of alpine culture in Slovenia, they can be purchased as tourist souvenirs from Velika planina. In the past, they had a ritual and symbolic significance in addition to their nutritional value. Shepherds made them in the summer on the mountain and in the autumn they gave them to women and girls as a proof of love and fidelity, possibly also promises of marriage. A pair of decorated trniči chesses is supposed to represent the image of a woman’s breast as a symbol of fertility. If the gift recipient accepted the cheese, she agreed to the shepherd’s court.