“White on White” Technique of Embroidery of Reshetylivka, Ukraine 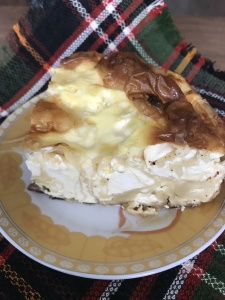 The ICH element “milina” deals with knowledge, skills and traditions for preparing and consuming the traditional meal of Bulgarian communities living in towns, settlements and villages of Odesa region, south of Ukraine – a stuffing in thin, like papyrus, dough. The fitting could consist of different ingredients: cheese, brynza, eggs, soared cream, even fruits and berries.

Milina is prepared on the eve of important events, such as family festivities, weddings, christening, foundation of new house, New Year, etc. Even within a village secrets and receipts for milina cooking differ from family to family. In the village Zoria, Bilgorod-Dnistrovsky district, which inhabitants have submitted the element to the regional list of ICH, there are mainly two kinds of milina: by proceeding dough it could be rolled out with roller or stretched out with hands; by way of putting in the form for baking it could be «редена» (Bulg.), that is, stowed in rows, or «вита» (Bulg.) – twisted. Knowledge and skills of milina cooking and traditions related to its consuming are transferred from generation to generation going out the ethnic groups. In the village of Zoria such tradition is practiced by different nationalities living there, including singing, welcoming and guessing fate.