“White on White” Technique of Embroidery of Reshetylivka, Ukraine

Project named “Presentation and interpretation of living heritage in museums”

“White on White” Technique of Embroidery of Reshetylivka

Element inscribed on the National Register of the ICH of Ukraine 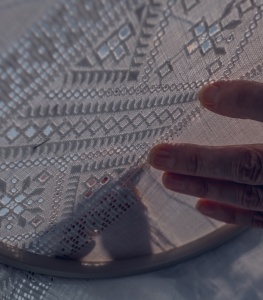 The white lace on white cloth embroidered by woman’s hand is like frost flowers on the window representing the town of Reshetylivka of Poltava region. This art rooted in XVII c. is well-known today in Ukraine and out. The characteristic feature of modern “white on white” embroidery is combination of 5 to 15 technic methods in one work. The embroidery is done on white and thin fabric – linen, marquisette – with white cotton threads moulinet. The classic Reshetylivka echnique is “counting  satin-stitch” or “lyshtva” as it is called in Reshetylivka region. With this technique they create geometric floral motifs; every element is made individually allowing masters to compile a variety of compositions, especially, on embroidering sleeves of women’s chemise, as several raws of vegetal ornamental branches or as combinations of different motifs. There is also a few of hemstiches (layering, in Ukrainian merezhka) for decorating embroidered shirts, for instance, “stovpchyk”, “prutyk”, “hrechehcka”, “chysna merezhka” and other. Ornamental compositions made with merezhka can be either geometric or floral. The plant and geometric motifs of merezhka are characterized by curved branch with leaves and flowers. The cutwork is one more most popular technique. The cutwork could be for 1,3,5 or more square holes. On embroidering “white-in-white” the figure of high relief is formed with light-and-dark effect.

The “white-in-white” embroidery of Reshetylivka is a unique artistic method practiced mainly by women and girls, but men turn to this art more often, especially when such skills are transferred in a family. The popular ICH element attracts young people going to study in Reshetylivka from different regions of Ukraine.