The annual three-day pilgrimage to St. Thaddeus Apostle Monastery in northwestern Iran is held each July. The pilgrimage venerates two prominent saints: St. Thaddeus, one of the first apostles preaching Christianity, and St. Santukhd, the first female Christian martyr. The bearers of the element are the Armenian population in Iran, Iranian-Armenians residing in Armenia, and followers of the Armenian Apostolic Church. Pilgrims gather in Tabriz before departing for the monastery. They cover 700 kilometers from Yerevan to the monastery annually. The commemoration ceremony includes special liturgies, processions, prayers and fasting. It culminates in a Holy Mass with Holy Communion. Special times are set aside for traditional Armenian folk performances and Armenian dishes are served. The pilgrimage is the primary social and cultural event of the year. Because attendees reside in tents in close proximity to one another, the sense of community is enhanced. The monastery has been a pilgrimage site for over nineteen centuries. However, during the years of Soviet power in Armenia, participating in the pilgrimage was prohibited. Bearers of the element preserved cultural memories of the pilgrimage and transmitted it to families and communities. Only after independence in the 1990s was the pilgrimage from Armenia resumed.

multinational application of Iran (Islamic Republic of) and Armenia

Inscribed in 2020 (15.COM) on the Representative List of the Intangible Cultural Heritage of Humanity

Armenian letter art and its cultural expressions constitutes the centuries-old art of Armenian letters, Armenian scripts, the rich culture of decorating letters and its various uses. The element is based on the Armenian alphabet created in 405 AD by Mesrop Mashtots, following the ‘one-letter-for-one-sound’ principle. The element is also distinguished by its wide range of ornamental scripts, generally classified by their shapes; knots, birds, animals, people, and mythical or imaginary creatures. Since their invention, Armenian letters have not only served their primary function to create written heritage, but also as numbers, cryptographs, riddles etc. Today, the letters are also used in handicrafts. Armenian letter art has penetrated almost all layers of society, particularly folk art. The element is practised across the Armenian territory and is integral to the cultural identity of Armenian people. Its bearers and practitioners include artists, carpet weavers, embroiderers, sculptors, linguists, calligraphists, jewellers and others. Educational institutions at all levels are involved in transmitting the related knowledge and skills to future generations, and several youth centres accord great importance to teaching Armenian letter art. Since 2008, continuous support has been shown for the annual ‘Granshan’ international design competition, and the Armenian Apostolic Church is central to acquainting children and youngsters with the element.

Inscribed in 2019 (14.COM) on the Representative List of the Intangible Cultural Heritage of Humanity

Kochari is a traditional dance that is widely performed throughout Armenia during holidays, festive celebrations, family ceremonies and other social events. It is open to all participants, irrespective of age, gender or social status. Kochari provides a sense of shared identity and solidarity, contributes to the continuity of historical, cultural and ethnic memory, and fosters mutual respect among community members of all ages. It is transmitted through both non-formal and formal means, and is one of the rare traditional dances whose chain of transmission has never been interrupted. Formal means of transmission include the inclusion of a ‘folk song and dance’ course in the curricula of comprehensive schools in Armenia since 2004, educational programmes in youth arts centres, increased visibility of the element through the internet and other media outlets, and institutional initiatives. Folk dance groups have also been active in various communities since the 1960s, and non-governmental organizations regularly hold dance classes. Non-formal transmission occurs within families and through spontaneously formed dance groups. Communities, groups and individuals are actively involved in ensuring the viability of the element, notably through the ‘Our dances and we’ initiative, which has been carried out since 2008, with experienced practitioners playing a key role in safeguarding efforts.

Inscribed in 2017 (12.COM) on the Representative List of the Intangible Cultural Heritage of Humanity

Lavash, the preparation, meaning and appearance of traditional bread as an expression of culture in Armenia

Lavash is a traditional thin bread that forms an integral part of Armenian cuisine. Its preparation is typically undertaken by a small group of women, and requires great effort, coordination, experience and special skills. A simple dough made of wheat flour and water is kneaded and formed into balls, which are then rolled into thin layers and stretched over a special oval cushion that is then slapped against the wall of a traditional conical clay oven. After thirty seconds to a minute, the baked bread is pulled from the oven wall. Lavash is commonly served rolled around local cheeses, greens or meats, and can be preserved for up to six months. It plays a ritual role in weddings, where it is placed on the shoulders of newlyweds to bring fertility and prosperity. The group work in baking lavash strengthens family, community and social ties. Young girls usually act as aides in the process, gradually becoming more involved as they gain experience. Men are also involved through the practices of making cushions and building ovens, and pass on their skills to students and apprentices as a necessary step in preserving the vitality and viability of lavash making.

Lavash, the preparation, meaning and appearance of traditional bread as an expression of culture in Armenia

Inscribed in 2014 (9.COM) on the Representative List of the Intangible Cultural Heritage of Humanity

The Armenian epic Daredevils of Sassoun recounts the story of David of Sassoun, a defiant and self-reliant youth, who by the grace of God defends his homeland in an unequal duel against the evil. The epic falls within the tradition of heroic folktales that dramatize and voice the deepest sentiments and aspirations of a nation. The epic is told in a lyrical voice with rhythmic enunciation, while separate cantos are sung in a rhyming poetic style. It is performed annually on the first Saturday of October (Epic Day holiday in some villages), during weddings, birthdays, christenings and major national cultural events. Usually the epos teller sits, wearing national costume and is accompanied on the duduk, a woodwind instrument. The epic-telling art has no gender, age or professional limitations. It is transmitted through families as a vocation, most strongly in rural communities with close links to folklore culture. There are 160 variants. Performances nowadays last up to two hours with the epic narrated in parts. It is commonly cited as one of the most important works of Armenian folklore, functioning as an encyclopaedia and repository of the entire range of knowledge about the heritage of Armenian people, their religion, mythology, philosophy, cosmology, customs and ethics.

Inscribed in 2012 (7.COM) on the Representative List of the Intangible Cultural Heritage of Humanity

Khachkars are outdoor steles carved from stone by craftspeople in Armenia and communities in the Armenian diaspora. They act as a focal point for worship, as memorial stones and as relics facilitating communication between the secular and divine. Khachkars reach 1.5 metres in height, and have an ornamentally carved cross in the middle, resting on the symbol of a sun or wheel of eternity, accompanied by vegetative-geometric motifs, carvings of saints and animals. Khachkars are created usually using local stone and carved using chisel, die, sharp pens and hammers. The carvings are then ground using fine sand. Small breaks and rough surfaces are eliminated by plaster of clay or lime, and then painted. Once finished, the Khachkar is erected during a small religious ceremony. After being blessed and anointed, the Khachkar is believed to possess holy powers and can provide help, protection, victory, long life, remembrance and mediation towards salvation of the soul. Among more than 50,000 Khachkars in Armenia, each has its own pattern, and no two are alike. Khachkar craftsmanship is transmitted through families or from master to apprentice, teaching the traditional methods and patterns, while encouraging regional distinctiveness and individual improvisation. 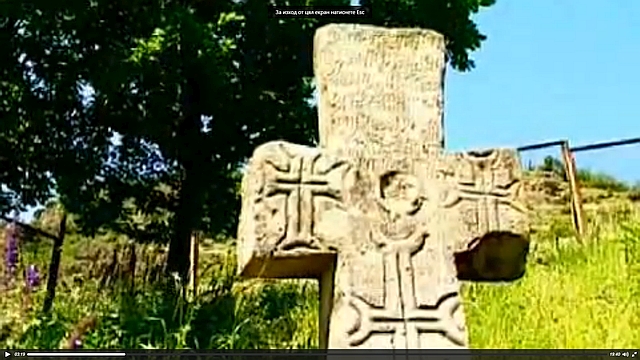 Inscribed in 2010 (5.COM) on the Representative List of the Intangible Cultural Heritage of Humanity

Duduk and its music

The duduk, the Armenian oboe, is a double-reed wind instrument characterized by a warm, soft, slightly nasal timbre. It belongs to the category of aerophones, which also includes the balaban played in Azerbaijan and Iran, the duduki common in Georgia and the ney in Turkey.The soft wood of the apricot tree is the ideal material for the body of the instrument. The reed, called ghamish or yegheg, is a local plant growing alongside the Arax River. The roots of Armenian duduk music go back to the times of the Armenian king Tigran the Great (95-55 BC). It accompanies popular Armenian traditional songs and dances of the various regions and is played at events, such as weddings and funerals. Although there are also famous duduk soloists, among them Gevorg Dabaghyan and Vache Sharafyan, the duduk is usually played by two musicians. One player creates the musical environment for the lead melody by playing a continual drone held by circular breathing, while the other player develops complex melodies and improvisations. There are four major types of duduk, varying in length from 28 to 40 cm. This variety allows the sound of the duduk to express various moods depending on the content of the piece and the playing context. The 40-cm long duduk, for example, is regarded as most appropriate for love songs, whereas the smaller one usually accompanies dances. Today, duduk craftsmen continue to create and experiment with different forms of duduks. Many Armenians consider the duduk as the instrument that most eloquently expresses warmth, joy and their history. Over the last few decades, the popularity of Armenian duduk music has faded, in particular in the rural areas where it originated. The duduk instrument is played less and less in popular festivities, but more often as a staged performance by professionals, risking to threaten the music’s viability and traditional character.

Duduk and its music

Inscribed in 2008 (3.COM) on the Representative List of the Intangible Cultural Heritage of Humanity